, (From left) Marilyn Piper, Gloria Bryant Banks and Pearlie Hardin Elloie, the first African American graduate students to earn degrees from the Tulane School of Social Work and among the first to graduate from Tulane, stand in front of a commissioned portrait by renowned artist Terrance Osborne, honoring them as Tulane Trailblazers. The women were also presented with Tulane Trailblazers medals. (Photo by Cheryl Gerber)

The Tulane University School of Social Work unveiled a commissioned portrait that honors three Tulane Trailblazers on Nov. 11 at the school’s building, located in downtown New Orleans. The portrait is by Terrance Osborne, internationally renowned artist and New Orleans native, and honors Gloria Bryant Banks (’64), Pearlie Hardin Elloie (’65), and Marilyn S. Piper (’64), the first African American graduate students to earn degrees from the Tulane School of Social Work and among the first to graduate from Tulane.

The Tulane Trailblazers, launched by President Michael Fitts in 2019, celebrates individuals from diverse backgrounds whose contributions have made a lasting impact on Tulane in becoming a more inclusive and diverse academic community.

Prior to the unveiling of the portrait, each of the trailblazers provided remarks, thanking those who inspired them and telling a little about their journeys at Tulane and their paths after.

Pearlie Hardin Elloie served as the director of the Office of Children, Youth and Families at Total Community Action before directing her own HeadStart Center, providing quality early childhood development care. She was also one of the first to push for Tulane to desegregate. She credited several individuals with inspiring her, including Ruby Bridges, Leona Tate, Gail Etienne and Tessie Prevost — the first students at just the age of six to desegregate public elementary schools in New Orleans.

Gloria Bryant Banks (’64) served as secretary for the Louisiana State Department of Social Services. She told the story of being interviewed and offered the position, when Gov. Edwin Edwards was in office. She recalled the governor noting her earning her degree from Tulane.

“I know very well that that Tulane University degree made a difference — a positive difference — in my getting that job,” Bryant Banks said. To this day, she added, she is “glad to be a Greenie.”

Bryant Banks remembered that her coming to Tulane, back in the 1960s, was met with “mixed emotions” by some, but her faith, family and others who supported her to continue.

Marilyn S. Piper (’64) served as head of Child Protection for the State of Louisiana and eventually served as an adjunct professor at Tulane. Piper said she knew she wanted to be a social worker when she was just a young girl and kept that goal with her throughout her schooling.

“When I found out, back in 1963, that Tulane had said they would enroll Black students, I said to my family and some of my close friends, ‘I’m going to apply, I’m going to be accepted and I’m going to succeed,’” Piper said. She said that after earning her degree, she remained determined to help “bring about change” to those who are underserved.

“I can say today that I have remained steadfast in my values, my beliefs and my goals while at the same time, utilizing and building on those strengths that I acquired at Tulane,” Piper said.

Following the remarks, Terrance Osborne unveiled the portrait, titled “The Trailblazer,” and explained that the women did not want traditional portraits. Instead, they wanted something that depicted their stories.

The portrait is on the third floor of the School of Social Work building, located at 127 Elk Place.

School of Social Work Dean Patrick Bordnick said of commissioning Osborne to honor the women: “I knew Terrance Osborne was the person that could convey a journey and end up with hope and perseverance like no one else could.”

Concluding the event, Bordnick told the trailblazers, “Your legacy at Tulane and in social work is phenomenal,” he said. “You paved the way for all types of students to be at Tulane, not just in social work.” 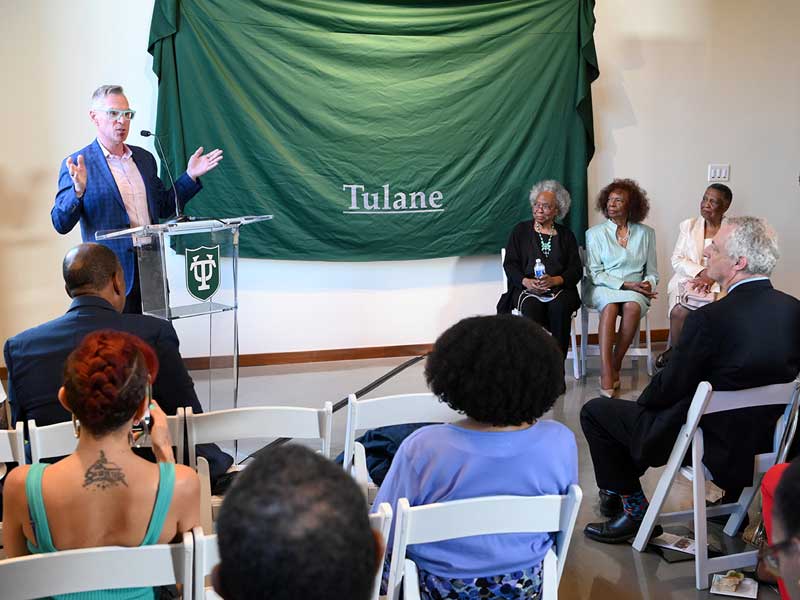 School of Social Work Dean Patrick Bordnick provides remarks before the portrait unveiling. , Family and friends applaud and take pictures after the portrait is unveiled.