A 2021 MacArthur Fellow, Alarcón is a writer, journalist and radio producer, as well as Professor of Journalism at Columbia University and contributing writer at The New Yorker. His narrative work explores the social, cultural and linguistic ties that connect people throughout Latin America and the United States. He is the author of four books of fiction, including the 2017 finalist for the National Book Award, The King is Always Above the People.

The turnout in Freeman Auditorium underscored the success of the two Spanish-language podcasts co-founded by Alarcon, narrative Radio Ambulante and weekly news show El Hilo. His live show introduced three new characters’ stories—Karla, Hernando and Jorge from Cuba, Colombia and Honduras, respectively—with additional artist visualizations that enabled his screen to “break the language barrier and create a moment” with the audience.

Associate Provost for International Affairs Laila Hlass opened the event noting Alarcón’s relevance to IEW’s theme of (Re)imagining Borderlands, intended to realize the borders we create and the cultures we share. She asked all in attendance “to reflect on Tulane’s place in the world as an academic home to scholars who are endangered in their homelands.”

Hlass then brought up School of Liberal Arts Dean Brian Edwards, who introduced the lectureship, named for 1995 Tulane graduate, founder of Tulane’s Asian American Student Union and seven-time Emmy Award winner Bobby Yan. The annual talk is part of the Tulane Trailblazers initiative, which celebrates contributions of people from diverse backgrounds who have made a substantial, lasting impact at the university. As Edwards described Alarcón’s contributions to transcending physical and cultural barriers alike, he wondered how any language could be labeled “foreign” when 350 languages are spoken in the United States.

Now in its 12th season (and seventh as part of NPR), Radio Ambulante uses aural journalism to provide a portrait of Latin America and Latinx communities, towards the mission of increased understanding. It earned the 2014 Gabriel García Márquez Award for Innovation in Journalism, the 2017 Third Coast/Richard H. Driehaus Best Foreign Language Documentary Award, and the 2020 iHeart Radio Award for Best Spanish Language Podcast. Alarcón’s ensuing creation of Radio Ambulante Studios, a groundbreaking Spanish-language media company, has grown quickly to more than 25 staff members in a dozen cities across Latin America, the United States and Europe. Both podcasts are collaborative, integrative story forms that have seen more than 8 million annual downloads and wide use as educational tools for journalism and Spanish classes.

Where the event is typically co-sponsored by the School of Liberal Arts and Tulane Trailblazers Initiative, its inclusion in International Education Week brought in the additional partnership of Tulane’s Office of Academic Affairs & Provost, Tulane Global, the Center for Inter-American Policy & Research, A. B. Freeman School of Business, and the Stone Center for Latin American Studies. 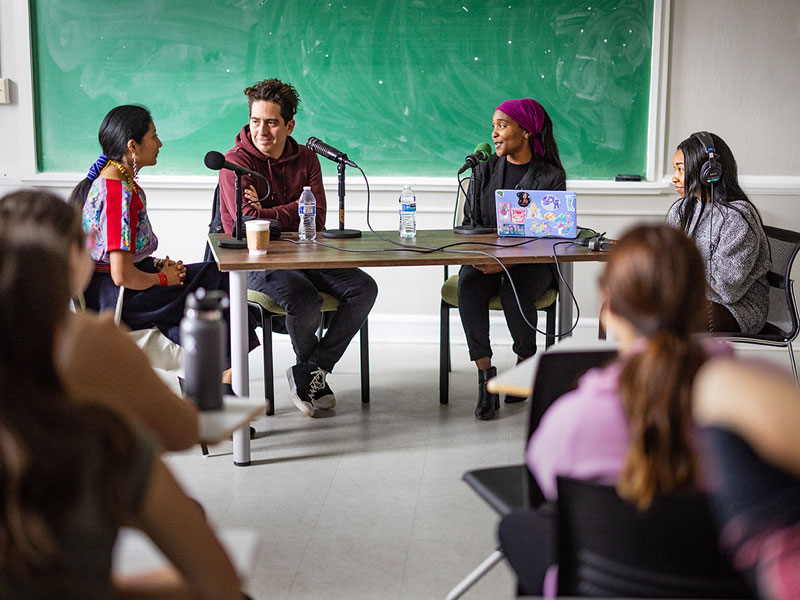 Daniel Alarcón visits a Podcasting &amp; Social Justice course to collaborate with students on a podcast recording of their own. The course is taught by Digital Media Practices professor Billy Saas. (Photo by Rusty Costanza)