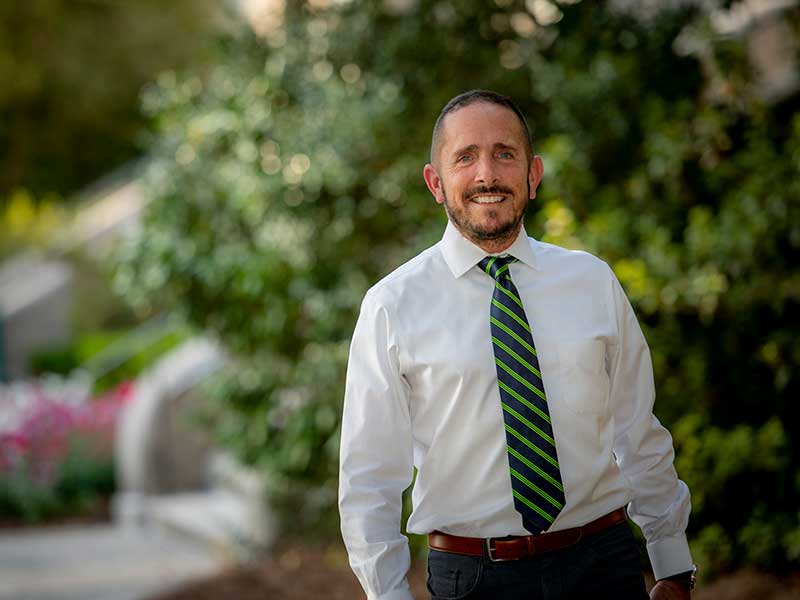 Shawn Abbott joined Tulane as vice president for enrollment management and dean of admission on Sept. 6. (Photo by Paula Burch-Celentano)

Tulane Today: What have you learned about Tulane since your arrival that will assist you in setting goals?

Shawn Abbott: I've encountered a pretty remarkable and profound sense of pride in the people that I've met at Tulane — the students, the faculty and the staff. I've really been trying to get out there and meet as many people as humanly possible, not just here at the university, but throughout the city of New Orleans. In addition to there being a palpable sense of pride, I'm picking up on a sense of urgency to make the university an even better place.

TT: What are your plans for continuing Tulane’s success in attracting the world’s highest achieving students?

SA: Tulane has experienced dramatic success in the last decade, especially if you look at the areas that fall under my jurisdiction: admissions and financial aid. Tulane has become one of the most selective universities in America. We have an enviable yield on offers of admission to the point where now the majority of students that have been offered admission accept their offer. It's now my responsibility to look at areas where the university could continue that success and where maybe we haven't had the kind of success that people are hoping for and really focus on those areas.

TT: What do you believe needs to be done to continue to increase diversity at Tulane and provide access for underrepresented students?

SA: I would argue that for a university in New Orleans, in an urban area, and with the kind of reputation that we have, that we can do better, more specifically, by students from low-income backgrounds. We also really should be more of an American destination for international students. Very soon, we're going to be hiring a new director of diversity initiatives who is going to focus not just on undergraduate admissions, but also collaborate in the space of financial aid, work with the office of the university registrar and with our individual schools and colleges and a variety of campus partners to collaborate on helping to make Tulane a more diverse institution. This position will be key, elevated in terms of title and will be a more high-profile, visible position.

TT: Will your office have a role in attracting graduate students?

SA: The division of enrollment has been charged with, at the very least, helping our graduate and professional schools to identify prospective students who may have an interest in their programs. My colleagues are working on an online portal of entry to those programs, and we're making improvements in the wayfinding space. The idea is to really help prospective students find where to go within our schools and colleges, because the process for admission and recruitment really isn't as centralized as it is at the undergraduate level.